A chilly start to the year for the 13 or so Ramblers (and two dogs) who managed to negotiate the complexities of the Saturday train (plus bus) timetable to rendezvous at Broxbourne Station at the appointed hour, for the seven or eight mile hike to Ware. “Where?” Oh, well..

The ice underfoot melted and the freeze abated as we strode out to embark on a slice of the River Lea Walk, complete with its own rather stylish sign. Curiously, there is no agreed spelling for the waterway: Lea or Lee appear almost at random on signs and maps between the Thames and Hertford; though the Power that Be in the shape of the Lee Valley Regional Park Authority have made their own decision about their own appellation, it does not necessarily apply. No fret about this from the walkers, however, who kept up an exhilarating pace along the river path, on a clear, calm, rather beautiful winter morning. 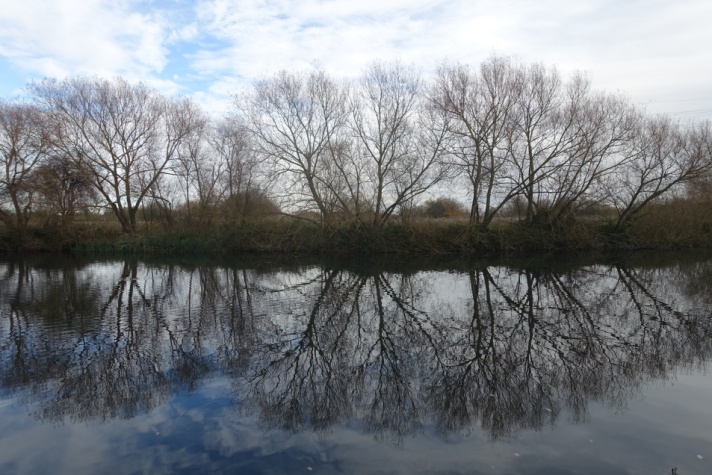 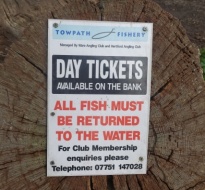 This was country frequented by the celebrated 17th century writer Isaak Walton, author of “The Compleat Angler”, who drank at some of the pubs along the Lea which are still open for business. Nowadays, the fish have to be thrown back. The Lea/Lee Valley is an intriguing tangle of suburbia, industry and wildernesses: lakes for watersports, rowing, and nature reserves as well. The flavour of the Lea is particularly evident at Dobbs Weir with its complex series of sluices, now in decay, and both picturesque and slightly worrisome at the same time.

That’s where we posed for the group picture. 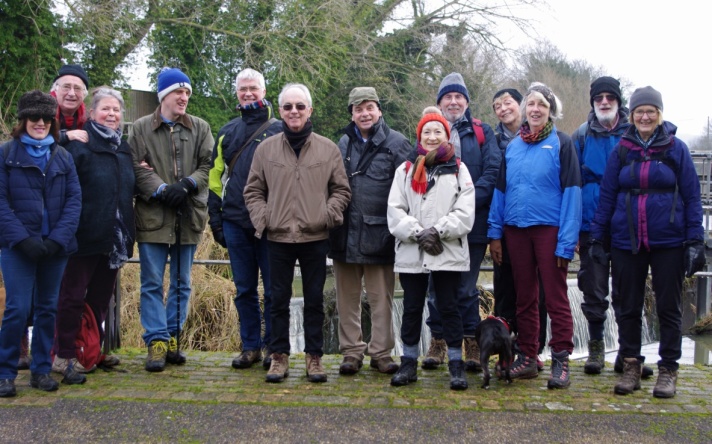 A striking example of the interesting ever-presence of industry on this walk is Rye House Power Station, operated (curiously) by Scottish Power. 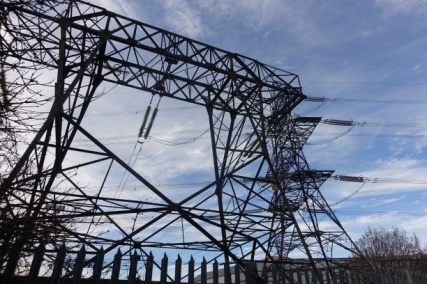 Lots of houseboats along the way, some from another England, but less decayed than usual, even trendy. 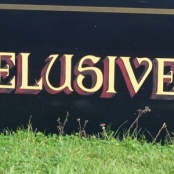 Just past the power station, we exchanged greetings with a man with a pneumatic dingy whose job it was (on this particular Saturday) to rescue railtrack workers should they fall off the bridge into the Lea. We hoped he wouldn’t have to.

The Ramblers made good time to Stanstead St Margarets, where a set of modern standing stones by Alex Peever marks the fact that the village lies on the Greenwich Meridian, astride which we Rambled at New Year in 2016. 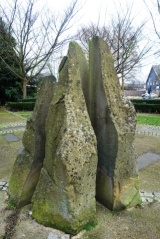 The stones and the surrounding area have engraved lettering with random words commemorating the maltings warehouses which once stood on the spot. But we sought out the results of the malting at the adjacent Jolly Fisherman, an obliging pub (except for the dog walkers) where after the main repast, the inescapable Puddings Were Served.

After lunch, diversionary tactics, as the day greyed and chilled. Some loitered at St Margarets for seeming hours waiting for the confusing rail replacement service bus which did not run from the station at all. The more energetic trooped up to Ware (no more jokes) past the nature reserve where sometime the bittern booms..but not on that particular occasion. Their rail bus arrived within seconds, and all were home as darkness fell.

A bracing way to start the year. Spring in your step for the next Ramble..on Saturday 28th April: perhaps in real countryside. Do come!