A walk through the past 2: Eastwards to Southgate Road

NOW LET’S GO EAST, to Southgate Road. The country boundary with Hackney runs all along the middle of it, which might make street cleaning problematic. Or repairs. Far fewer pictures than of Essex Road, but one or two evocative ones: 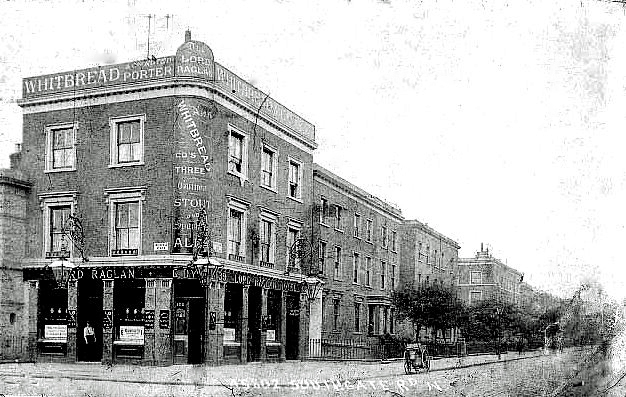 The end of Ockendon Road is just about visible after the second block of houses in this late 19th century photograph of the long vanished Lord Raglan pub on the corner of Southgate and  Englefield Roads. The site is now the block of flats now called Lord Raglan Court. The delivery boy whose cart is outside the pub appears to have stopped off for a pint. The barmaid  cannot resist the chance of a picture.  The pub appears to have a (very early) TV aerial on top, no doubt so that patrons could enjoy First Division matches over their Whitbread porter.

A little further down, here is Southgate Road at (probably) the beginning of the 20th century, very recognisable even though Trinity Presbyterian Church is long gone. It has been replaced by the flats at De Beauvoir Court. The Church moved from London Wall in 1857 to what was then called Church Road, now Northchurch Rd, opposite the Jolly Farmers pub. It turned into the Dog and Dumplings, which turned into the Northgate, which is now The De Beauvoir Arms. (In the old days before “branding”, pubs kept their names for decades and advertised a change of direction with the sign “Under new management”. When a pub changes its name, a little bit of history is lost, or rewritten.) The church congregation had dwindled to almost nothing at the end of the 19th century. But when the picture was taken it was undergoing a revival with a new minister. It closed in 1934.

Interesting how even today the shops still build out their stock onto the ample pavement here. A family done up in their Saturday best (?) strolls past the second awning on the left.

In the distance–where the crossing now is– a fearless pedestrian has just come out of De Beauvoir Town probably to catch the northbound tram. He may be clutching a bottle of the Milkmaid Milk advertised on the front of this southbound tram, forerunner of a coffee from the Deli. This pub offers stronger stuff than the Lord Raglan: Ind, Coope stout, rather than porter. 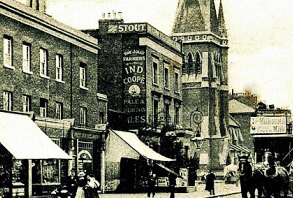 Now jump forward 50 years or so:

And this is a rainy day in the 1950s, with two trolley buses soon to be phased out. The 647 route was from London Docks to Stamford Hill; the 641 ran from Winchmore Hill to Moorgate. The sun came out for this snapshot of another 641 passing the Thomas Briggs building at the end of Southgate Road and about to turn into Baring Street. 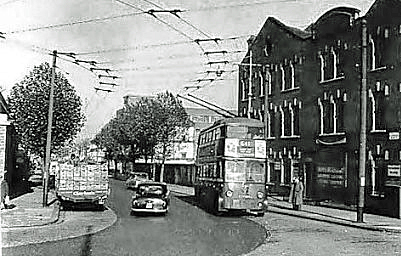 Just behind the trolley bus, but long demolished even then, and now the site of a block opposite the Tesco branch, was the now famous Brotherhood Church. It was on the corner of Balmes Road, where the De Beauvoirs (Lords of Balmes) lived further along in Balmes Hall. In the 19th century the Hall became an asylum which gave us the slang word “barmy” (at least in popular etymology).  The Church became just as famous.

Famous, of course, because it was here that in 1907 that the Russian Social Democratic Labour Party held its fifth congress. A gathering in exile from its own country, it was the forerunner of the Soviet Communist Party. 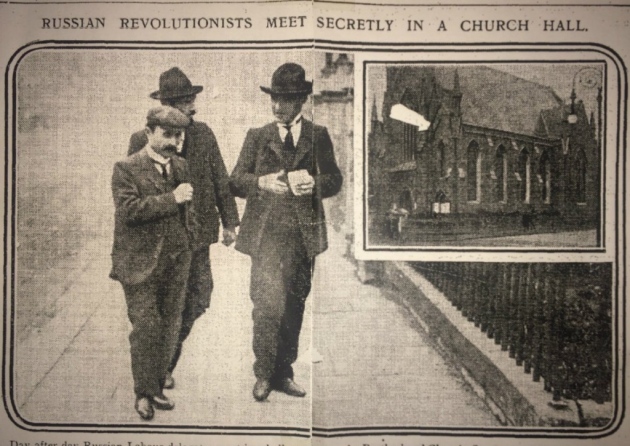 Among those attending for three weeks in May were Lenin, Stalin, Trotsky, and Rosa Luxemberg.. The celebrated anarchist Peter Kropotkin was a guest. Lenin is in this imaginative painting by the Russian artist Joseph Silver:

The writer Maxim Gorky has an evocative passage about the Fifth Congress in his autobiography:

I can still see the bare walls of the ridiculously shabby wooden church in the suburbs of London, the lancet windows of a small narrow hall much like the classroom of a poor school. It was only from the outside that the building resembled a church. Inside there was a total absence of any religious attributes and even the low pulpit stood not in the back of the hall but squarely between the two doors. I had never met Lenin until that year, nor even read him as much as I should have done. I was strongly drawn to him, how-ever, by what I had read of his writings, and particularly by the enthusiastic accounts of people who were personally acquainted with him. When we were introduced he gripped my hand firmly, probed me with his penetrating eyes, and said in the humorous tone of an old friend: “I’m glad, you came. You like a fight, don’t you? Well, there’s going to be a big scrap here.”

There was indeed a big scrap: huge arguments between the Bolsheviks arguing for an armed uprising against the Czar, and the Mensheviks who opposed a putsch. There were even rows about whether or not this should be called the “Fifth” Congress.

Here’s how the Daily Mirror of 15th May 1907 reported the proceedings: 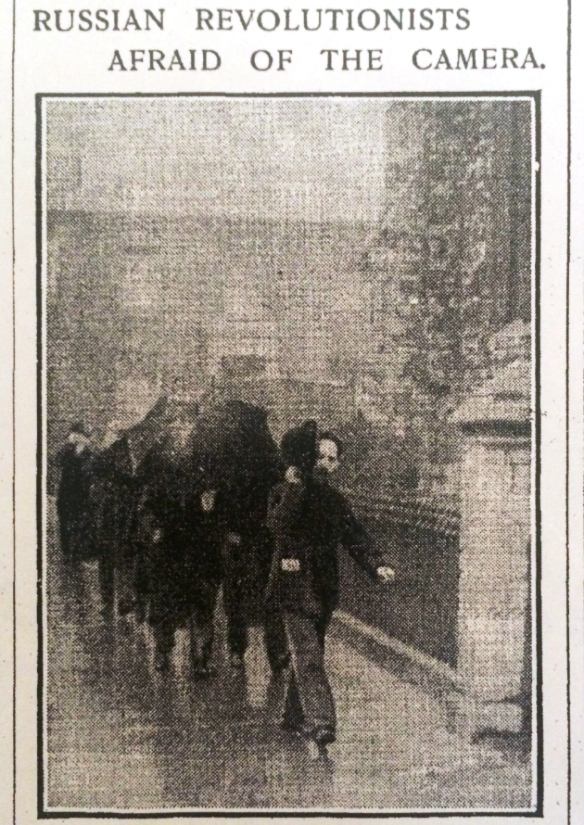 Ten years later, in October 1917, the Brotherhood Church was again in the news. This from The Times of October 8th: 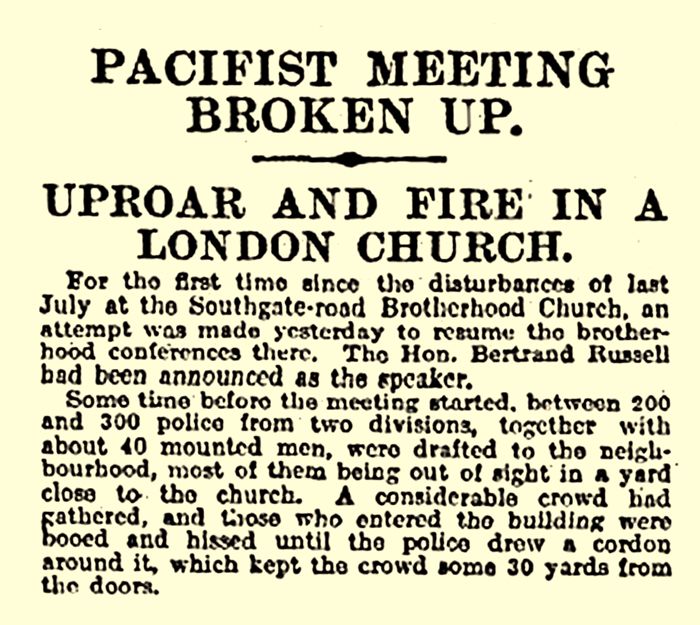 More about the Brotherhood Church and its dissenting tradition here:

And a PS from Election Day, December 2019. This striking graffiti appeared at the south end of Southgate Road, just 150 yards/metres from where the Bolshevics/Menchevics foregathered in 1907: 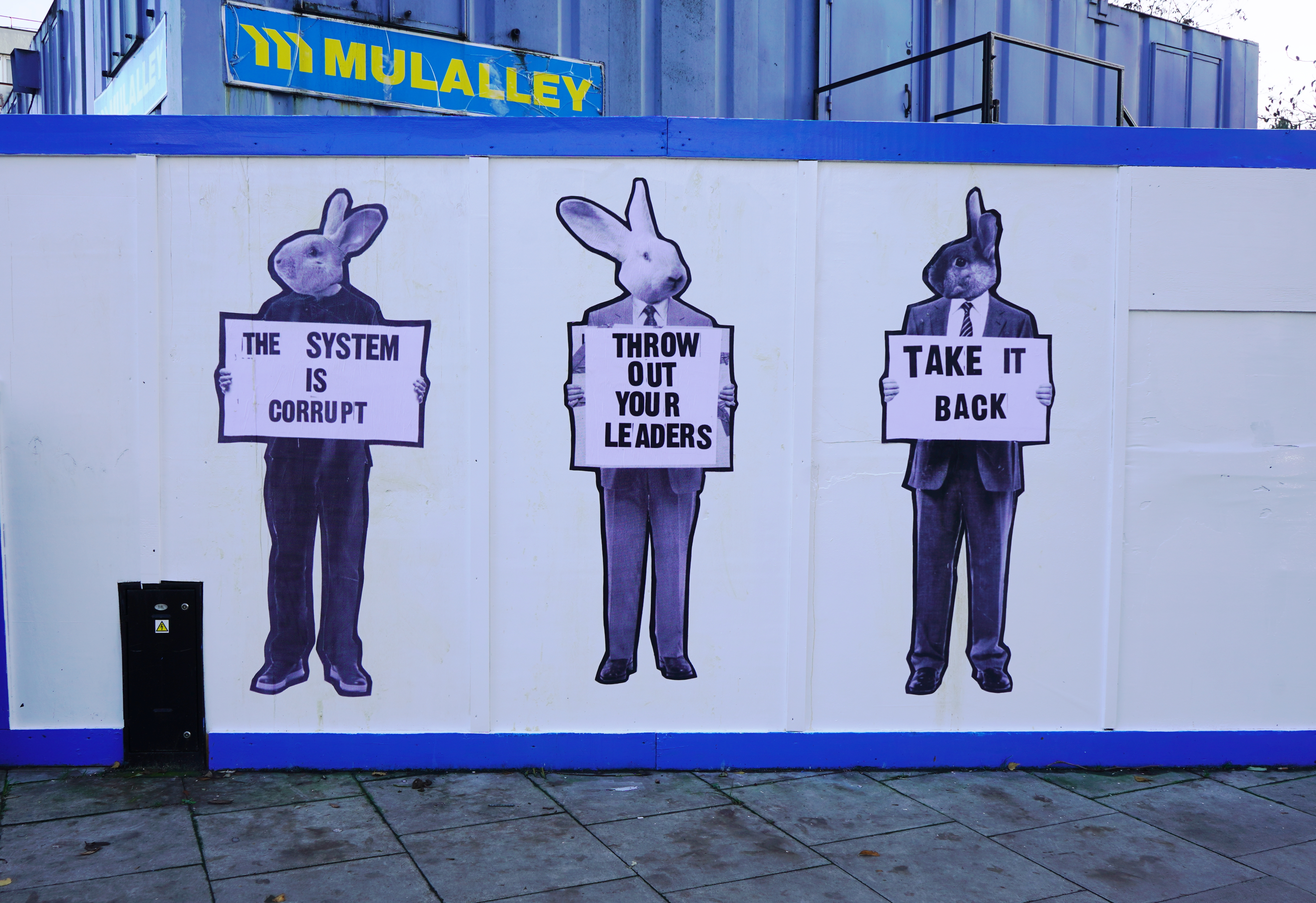 Further north, here’s a rather wide angle shot of Southgate Road in what may be the early 1960s. Not much need then for a Congestion Charge, but developing in the foreground,  a fledgling pothole: 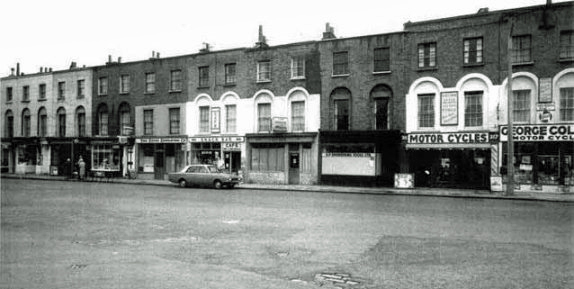 ALAS, Southgate Road lacks buildings with the architectural distinction of some of those in Essex Road, but there’s a charming outbreak of irony in the middle. The flaneur is suddenly transported to the seaside with a cluster of houses which all have unlikely briny names, all of them stylishly carried out by an inspirational signwriter who does not (alas) sign his or her name. It probably started here:

..and then the splendid habit spread:

And it even crossed the Road:

Just along from Port Side and Starboard (which are actually in Southgate Grove) there’s another bit of architectural fantasy, in Orchard Mews (which may of course have been an orchard once). The Mews houses built in 1984 are capped with little domes very reminiscent of colonial pith helmets. 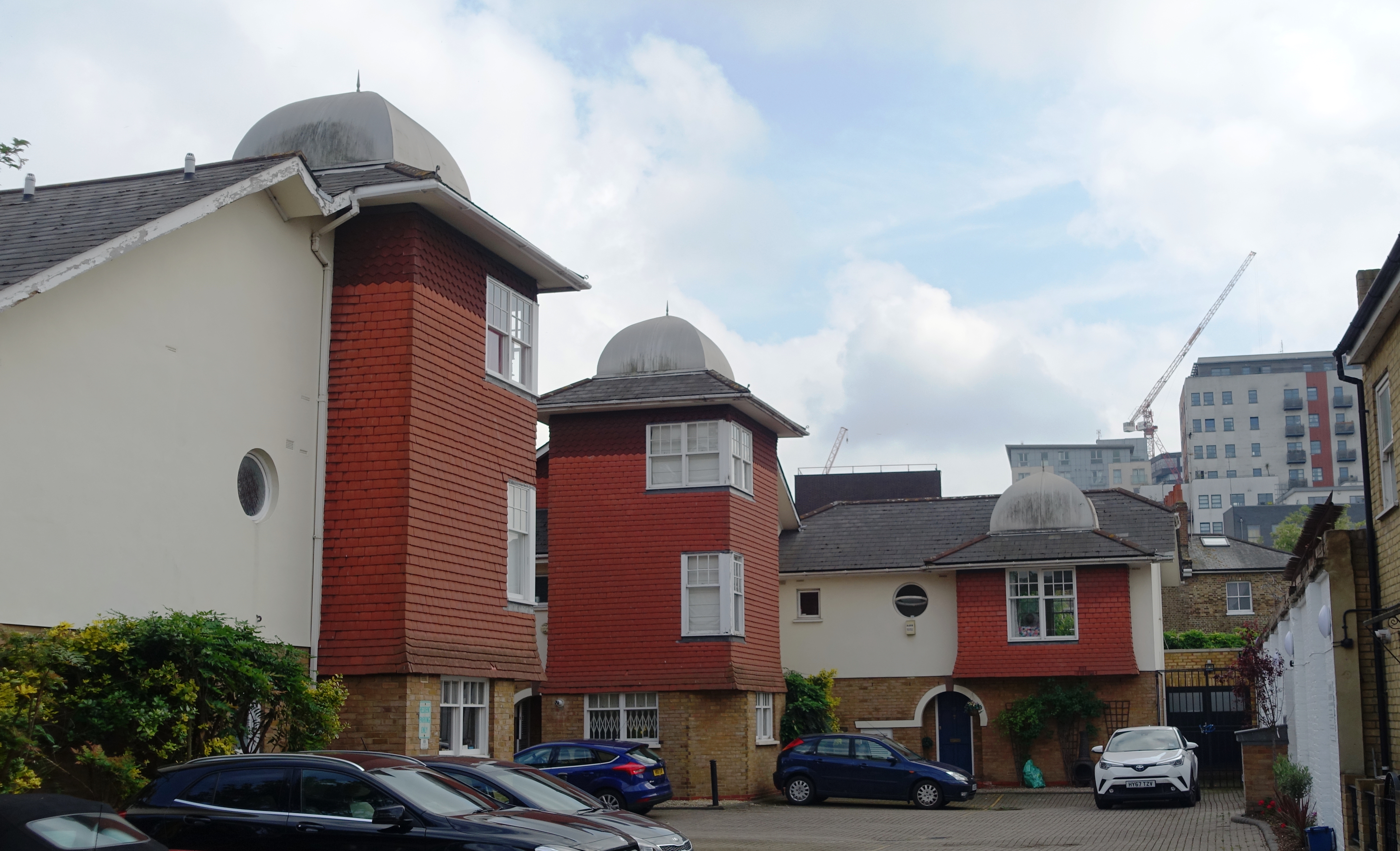 This curiosity seems to have been inspired by a cheeky bust produced in 1912 by the New Delhi office of Sir Edward Lutyens: a portrait of the great architect wearing an architectural decoration from his design for the Viceroy’s House in the city, in the form of a solar tepee. The bust stood for years in Lutyens’ London Office, and a postcard of it used to be sold at the RIBA bookshop. The architect here was not Sir Edward but the also distinguished Piers Gough, founder of the CZWG practice. In the words of Flanders and Swann, a very amusing mews.

NO PICTURES appear (alas!) to have survived of the short-lived Loyola nightclub on the corner with Ball’s Pond Road said to have been opened in the 1950s by Buddy Holly and Salvador Dali. Did this actually happen? If so, it must have been on the site which later became a place to test the turning abilities of buses and HGVs. When it was developed in the 2000s, the estate agents advertised the new flats with a big placard inviting prospective buyers to “Live the Islington Lifestyle”.

Three corners of the junction were indeed in Islington–but not, as it happened the fourth, the place where the advertised flats were erected. That was in Hackney. Occupants still look out on the Islington that surrounds them with a little bit of envy. Yes, the past is another country, and they did things differently there.

Then and now along Southgate Road (comparing some of the pictures here with similar views today) is on a separate page: https://ockendonroad.wordpress.com/2018/07/11/yesterday-and-today-compare-the-differences-on-southgate-road

Here’s another walk into the past..up and down Essex Road: