Oh! Look at the trees!

For more than a century, Ockendon Road was pretty much treeless, and rather grim as a result (look at the historic pictures here). Then along came Bill Bayliss, long-time Road resident and a formidable Islington councillor or alderman from 1952-83.

Bill Bayliss not only opposed council-built residential tower blocks in the borough; he also instituted the policy of planting trees in Islington streets. Thus it was that sometime in the 1980s, residents were offered the chance to pay (was it £30?) for two trees in front of their houses; many people took up the offer, and you can see the result almost 40 years later.

It looks as though the trees have just been planted in this picture taken in 1978 by Barry Davies:

Here’s the view from the same spot 40 years later:

Back in the 1970s, here’s what it looked like facing the other way to Southgate Road in 1979, on a rather sunnier May day: 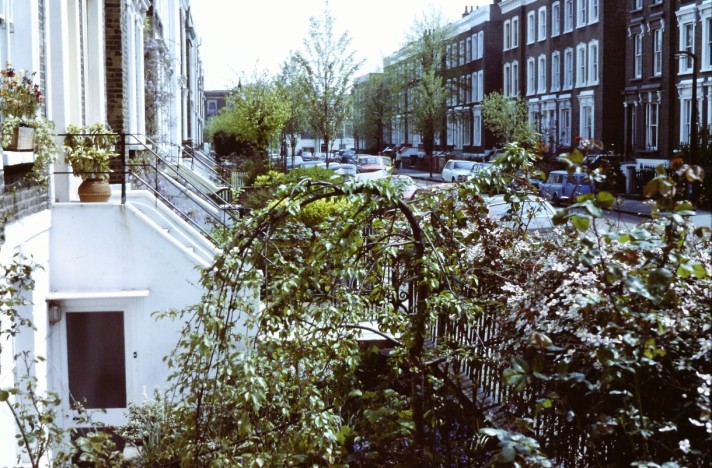 What a difference 40 years makes!

Here’s what Tony Campbell wrote about the trees in 2007-8:

Our trees are widely different in size, shape and colour, as well as in their seasonal adaptations. They belong, broadly, to seven species. The majority along the odd-numbered side are Crab Apples. The pinging of the fruit on the ground or car roofs is well known to insomniacs. The number of vibrant colours crammed into one of their fallen leaves is a delight, even if their ever-spreading roots are a challenge to the tree gardeners.

Very different in the shapes of their leaves as well as their overall size and outline, the sorbus have one obvious common feature: they all have berries, which, starting green or yellow, turn orange or scarlet in the late summer. The cream-coloured underside of the leaves of the larger Common Whitebeam is distinctive.

The remaining trees comprise a hybrid Cherry (38, 41), with the distinctive horizontal lines round the bark and the bulbous base to which the more delicate upper part was grafted. Some of the trees’ outlines are reminiscent of a child’s set of wooden shapes. 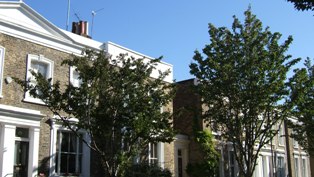 Most noticeable are the cone-like Rowans and the pyramid-shaped, rough-barked Turkish Hazel (2, 59). Besides the shower of small dead branches the latter throws down, in recent years it has started to produce nuts. Courtesy, perhaps, of the squirrels, the two trees are now beginning to be circled by the weird cups protecting the hazel nuts. These have an octopus-like assortment of tentacles, apparently made of plastic and dreamt up by the props team on a horror movie.

As well as the pavement trees there are mature Limes in two front gardens roughly opposite each other near Wall Street (9, and a heavily pollarded one by 18), and another on the Southgate Road corner. These are larger and older than any of the official trees and would, if their basal growth was unchecked, spread right across the pavement. 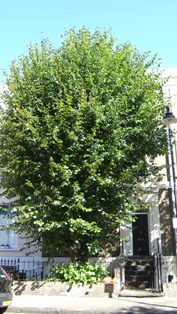 A number of trees in front gardens complement the street trees with attractive shapes, flowers or leaves, and with their spring blossom or autumn colour, especially the brilliant fire-red of the Stag’s-horn Sumac (one of which, sadly, blew down in the gale of January 2007).

The trees do not ‘belong’ to us, even though they were paid for by residents. In the 1970s, at the instigation of Bill Bayliss, long-time resident, and then chair of the relevant committee, Islington Council decided to go green. They planted the trees and are responsible for their maintenance, along with an estimated 10,000 others in the borough – a density claimed to be greater than anywhere else in London.

Theoretically, there is a four-year pruning cycle. Ours were last cut back, heavily, in 2006, with many of the lower branches removed, particularly those over the road. As a result some now have an irregular shape. A few of the trees have grown too large, which was not intended. They were supposed to be relatively low-growing varieties. In some cases, they were grafted onto hawthorn rootstock, which curbed their growth.

Unfortunately, the trees – now some 30 years old – are showing signs of stress. The Whitebeam outside No. 11 blew down in January 2007 and a Swedish Whitebeam by No. 60 was diseased and had to be felled. Others have suffered serious damage from large vehicles (especially skip trucks and removal vans).

Did you know that Whitebeams are suitable as street trees because the hairy underside of their leaves (on both Common and Swedish species) reduces evaporation and hence makes them more drought-tolerant?

As planned, the dead crab apple outside No. 67/69 was felled and replaced with a Sweet Gum (Liquidambar styraciflua ‘Worplesdon’) which has a crimson/yellow leaf effect in autumn. Outside No. 60, they have put a Common Alder, but a slower-growing, ‘cut leaved’ variety (Alnus glutinosa ‘Laciniata’). More recently a Ginkgo was ceremonially planted by Councillor Polling outside numbers 11-13 where the tree blew down in January 2007. A new tree has also been planted outside No 16 so the overall result has been to increase the number of trees by one.

Happily, the Swedish Whitebeam outside the end house (No. 92) was pronounced healthy, because the fungus on the street side (Flammulina velutipes – edible if you are feeling intrepid) feeds on dead wood and so is no threat to the tree. However, another example of the same tree by No. 75 has both ganoderma and another fungus, and is not likely to live for many more years. 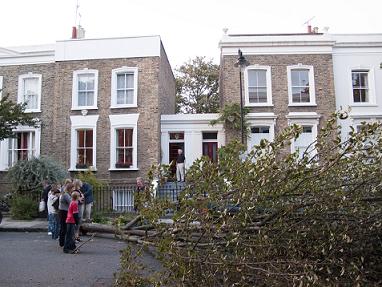 3rd September: A crab apple tree outside No. 49, apparently rotten, fell down on a gusty day. Luckily David Giles, our resident photographer, was on hand to capture the event.

4th September: This time a neighbouring tree was noticed swaying in wind. Islington Tree Department were alerted and swung into action again! Tony Campbell comments: ‘They noticed the same ganoderma fungus around its base that had brought the tree down the day before and said it shouldn’t be left up overnight. Hence the contractors dealt with it that evening.

Questions obviously arise about our trees in general. Although they were inspected earlier in the year, they are going to need to look again at them all again. Since most of the trees on the north side are crab apples, I asked the tree officer if they were particularly prone to ganoderma infection. He didn’t think this was the case, but it must put a question-mark over the remaining survivors.

Some of our trees are well over 30 years old. Since, because of urban stress, etc., they aren’t expected to last more than 40 years, we must assume that a number of others will fall or have to be felled. A fact of life I fear, but I assume they will replant, perhaps with a greater variety next time, and with trees of more suitable size.

Here’s a quick guide to the leaves on our trees: 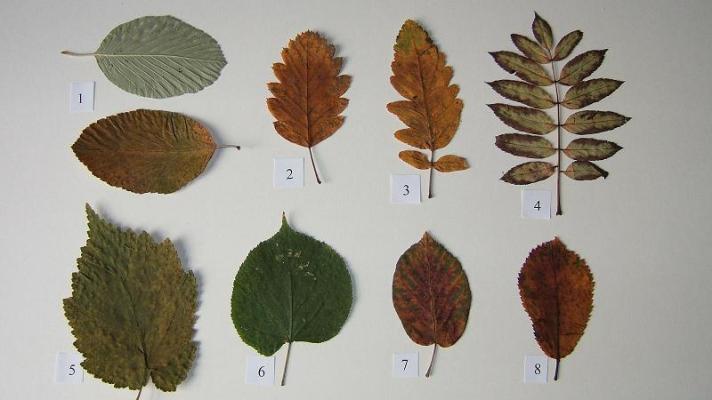 Over the years, the Gardens have run many awards. Some of them are celebrated here: https://ockendonroad.wordpress.com/2018/05/30/blessed-plots-tree-gardens-since-2008

How the Road used to look: https://ockendonroad.wordpress.com/2018/05/17/a-walk-through-the-past-going-westwards